ESPN Wide World of Sports, a sprawling 220-acre complex at the mega-resort in Florida, is poised to become the center of the basketball universe.

Walt Disney World is known for many things, but few people would immediately associate it with athletics, unless you count endurance walking or Super Bowl winners gleefully exclaiming their intention to visit, a marketing gimmick that started in 1987. Tucked behind oak trees and sabal palms on the southern edge of the Florida mega-resort, however, is ESPN Wide World of Sports, a 220-acre basketball, soccer, volleyball, lacrosse, baseball and competitive cheer complex that serves as an overlooked Disney World engine — and is expected to soon become the capital of the basketball universe.

The N.B.A. has been in negotiations with Disney to restart its season by holding games and practices at the complex. Players, coaches and staff would also stay at Disney World, where Disney owns 18 hotels, ostensibly providing a protective bubble from the coronavirus. The yellow-walled sports complex, which has twice hosted the Jr. N.B.A. Global Championship, has been vacant since March 15, when Disney World closed because of the pandemic, causing Disney to furlough more than 43,000 Florida workers.

“We obviously have the capacity,” Bob Chapek, Disney’s chief executive, said by phone last week, adding that he was “very optimistic” about making a deal with the league. Chapek noted that the ESPN complex has “turnkey” broadcasting capabilities, including an ultrahigh-speed fiber-optic connection to ESPN’s headquarters in Connecticut. Disney-owned ESPN is a top broadcast partner for the N.B.A., which suspended its season on March 11.

The talks with Disney involve a late-July restart to the season. “We hope to finalize those plans soon,” Mike Bass, an N.B.A. spokesman, said in an email on Monday.

Here are some things to consider as Disney and the league complete an agreement: 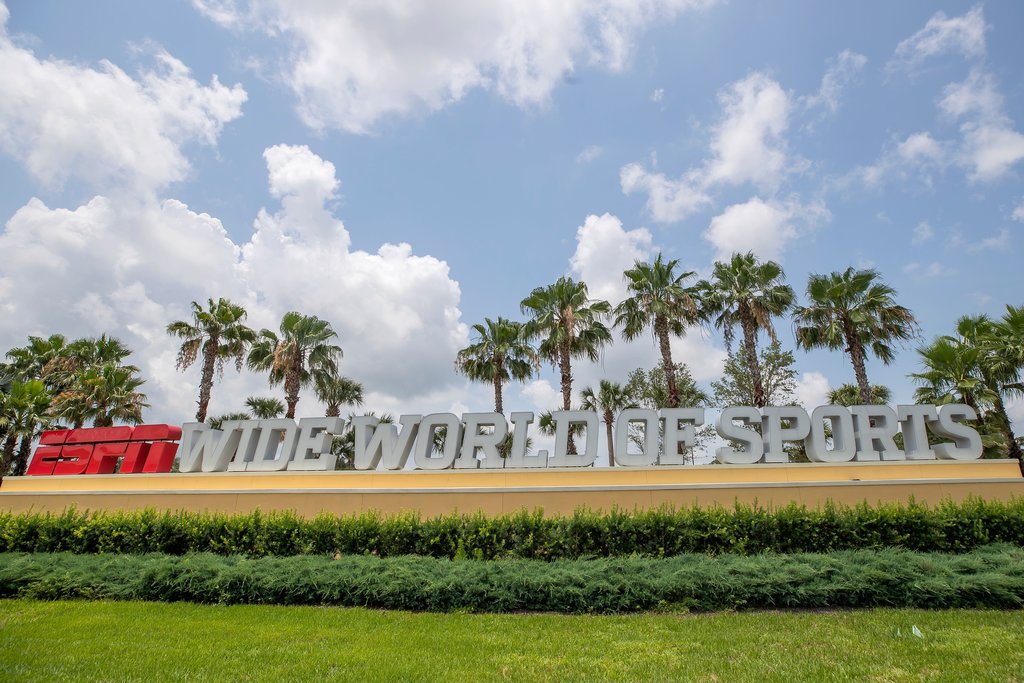 What is the Wide World of Sports Complex?

Everything about Disney World is colossal — at 25,000 acres, it is nearly twice the size of Manhattan — and the sports facility is no exception. Three arenas can be configured into 20 basketball courts, according to Faron Kelley, vice president for ESPN Wide World of Sports, Water Parks and runDisney. That would allow the N.B.A. to play two games at once (no fans in the stands) and still have a practice space. The compound also offers restaurants, a nine-lane track and field complex, 17 grass playing fields and a 9,500-seat baseball stadium, which the Atlanta Braves used for spring training for more than two decades. (They decamped last year for a new park near Sarasota, Fla. Disney has not secured a new tenant.)

“Disney-style customer care, of course, has been drilled into everyone who works there,” Richard Lapchick, director of the DeVos Sport Business Management program at the University of Central Florida, said by phone on Saturday.

Just how Disney-fied is it?

Relax. There are no referees wearing Mickey Mouse ears.

“You will only see a nod and a wink to Disney characters,” Kelley said. Outside the baseball stadium, for instance, there is a statue of Mickey winding up to pitch. His feline nemesis, Peg-Leg Pete, wields a bat nearby. 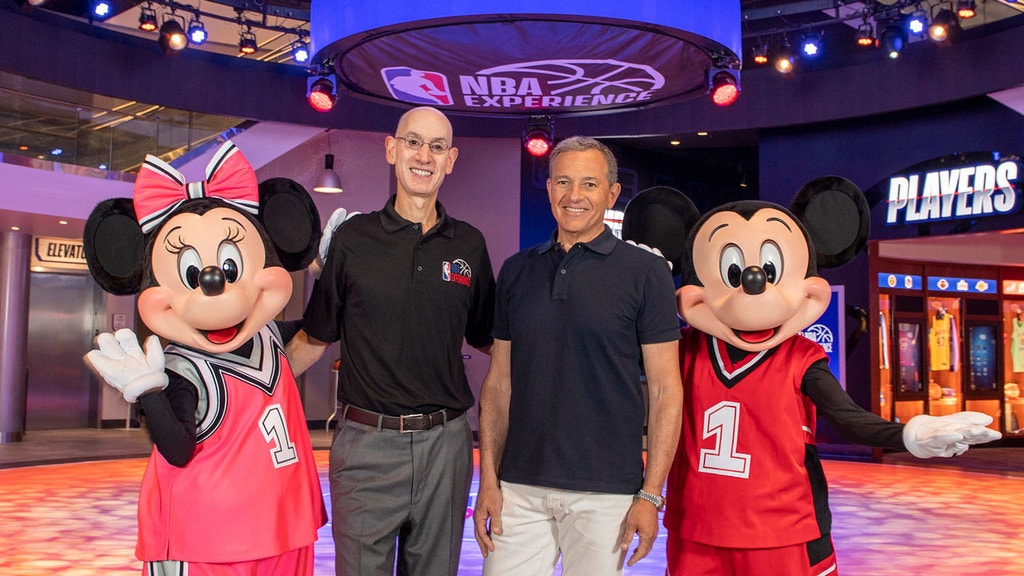 How did the N.B.A. zero in on Disney World?

The league considered a number of locations, including IMG Academy, the Endeavor-owned sports complex in Bradenton, Fla., but two spots stood out on the list: Disney World and Las Vegas. In addition to safety — creating that bubble — costs came into account. It was certainly not lost on Adam Silver, the N.B.A. commissioner, that Disney is the league’s biggest customer, paying an analyst-estimated $1.4 billion a year to broadcast games on ESPN and ABC. Disney World also has fewer opportunities for players to get into off-court trouble.

Silver and Robert A. Iger, Disney’s executive chairman, who has been leading the talks from the Disney side, have what you might call a bromance. Last summer, they posed for photos together — along with Mickey and Minnie — at the opening of the NBA Experience, a two-story interactive attraction at Disney Springs, an outdoor Disney World shopping mall. “Disney creates memorable experiences better than anyone,” Silver said at the time.What is the benefit for Disney?

Disney World’s four major theme parks will reopen in mid-July, but attendance will be severely restricted, at least at first. A deal with the N.B.A. would give the resort a much-needed shot in the arm. It would put employees back to work, offer the invaluable marketing message that the property is safe to visit and generate facility fees and hotel spending. At a minimum, analysts said, the N.B.A. will spend tens of millions of dollars.

But the real value for Disney would come from ESPN, which has been starving for live sports to broadcast. Michael Nathanson, a media analyst, recently estimated that ESPN would lose $481 million in ad revenue if the N.B.A. did not complete its season and playoffs.

Lapchick called the pending deal “a huge win-win” for the league and Disney. 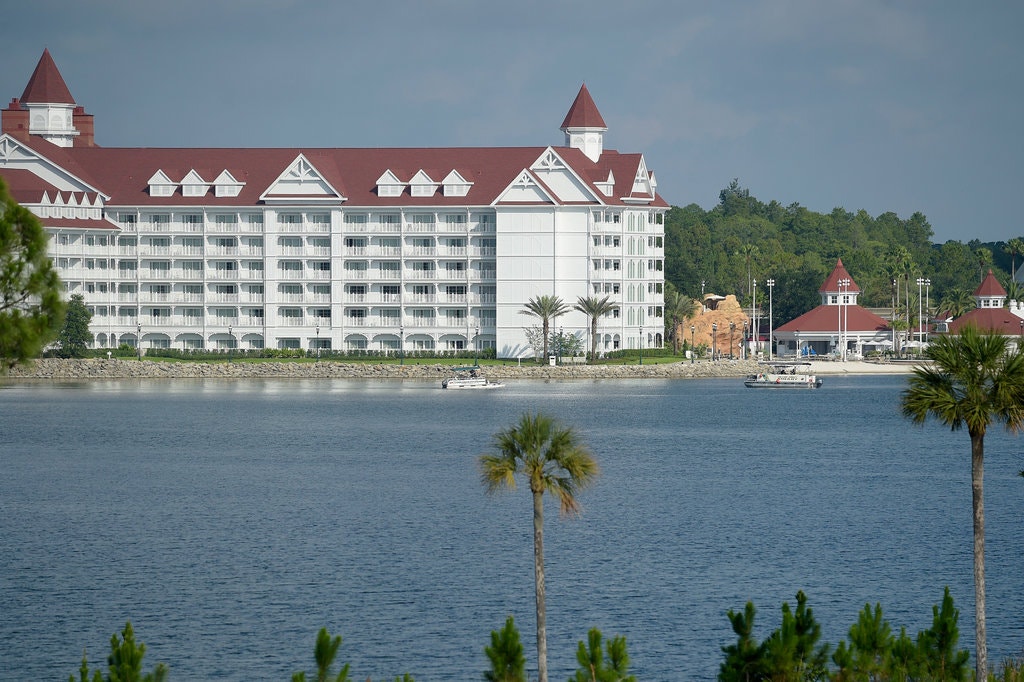 Where will players stay at the resort?

Fans have been having fun imagining how Disney World lodging might be doled out. Should the highest-ranked players get the most luxurious digs, like $1,150-a-night lake-view villas at Disney’s Grand Floridian? One blog suggested that the Knicks pitch tents at Fort Wilderness, the resort’s $102-a-night campground. Ouch.

Disney and the N.B.A. have not commented, but there is no chance that players will be sprinkled across a dozen hotels. The league will use one or two. The 443-room Four Seasons is high on the draft board; it sits inside a gated, ultraexclusive area near the center of Disney World called Golden Oak.

What about Major League Soccer?

M.L.S. has also been talking to Disney about return-to-play scenarios, but haggling within the league over timing and pay has created speed bumps.

An initial proposal had teams sequestering at Disney World starting early this month. They would practice for a few weeks before resuming play into August. Now the league — after pushback from the M.L.S. Players Association — may have some teams regroup in their home markets before holing up at Disney World in early July for a tournament lasting several weeks. A league spokesman had no comment.

M.L.S. would bring at least 1,200 people to the resort. One possible living quarters: Coronado Springs, a 2,345-room Disney hotel that typically hosts conventions. It underwent a megawatt renovation and expansion last year. Coronado is also well contained; there are no adjoining hotels, as is the case elsewhere at Disney World.

ESPN, Fox Sports and Univision hold soccer broadcast rights. M.L.S. has been shut down since March 12.

What is the history of sports at Disney World?

Disney World, about 20 miles southwest of Orlando, opened in 1971 with one park (the Magic Kingdom) and added two more parks, Epcot and Hollywood Studios, in the 1980s. Most of the ’90s were about attracting people to fill them — especially nontraditional visitors. Disney Vacation Club, time-share condos aimed in part at empty nesters, opened in 1991. A weddings and honeymoons division opened at the resort in 1992.

And the first Disney World marathon took place in 1994, sparking a year-round runDisney business. The Wide World of Sports Complex opened in 1997 to tap into the youth sports industry, which was evolving far beyond Little League. Disney saw an opportunity to collect fees by hosting tournaments, fill hotel rooms, sell theme park tickets and merchandise and deepen teenagers’ affinity for its brand.

How much money does the facility generate?

Kelley wouldn’t provide any financial information or assess the pre-pandemic health of the sports tourism market. But he estimated that the complex attracted about two million people last year, up from 1.2 million in 2007. To compare, the Magic Kingdom, Disney World’s most popular theme park, attracts about 21 million visitors annually.