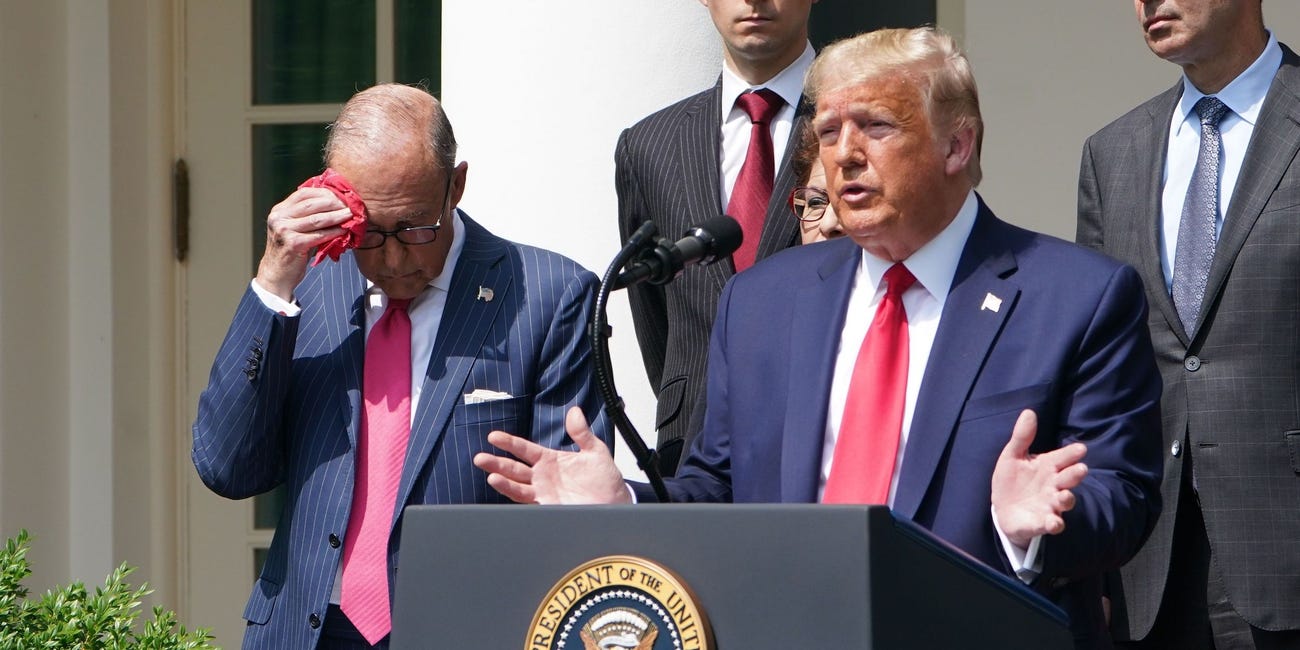 US President Donald Trump, with Director of the National Economic Council Larry Kudlow (L), holds a press conference on the economy, in the Rose Garden of the White House in Washington, DC, on June 5, 2020.

On Friday, the Bureau of Labor Statistics (BLS) released the May jobs report, the latest snapshot of the US labor market. The report contains reason for optimism in the face of the crippling pandemic and reveals how much more support is needed to ensure a return to full employment.

Devil in the details

The big headline was what would be in any other circumstance a massive surge in employment: the monthly employer survey showed 2.51 million more employees on payrolls than there were in April when economic effects of COVID-19 were largest.

This gain came as a shock given that economists had projected a drop of more than 7 million jobs in the month. The gloomy predictions were based primarily on recent initial unemployment claims data. And the estimates seemed logical since the number of Americans receiving unemployment insurance (including those covered by Pandemic Unemployment Assistance, which extends benefits to more Americans than the traditional unemployment insurance program) continued to rise in May.

But survey-based approach of the BLS showed what is, on the face of it, a much brighter picture. There are, however, some caveats. In the report, the BLS emphasized that responses to its surveys appeared to be making things look a bit better than they otherwise would. BLS economists estimated that the 13.3% unemployment rate was about 3 percentage points lower than it would be if not for irregularities in survey response patterns.

Additionally, while the overall employment number did bounce, the improvement was entirely because the number of people reporting that they were temporarily laid off declined dramatically. The tally of temporary, likely pandemic shutdown-related layoffs dropped by 2.72 million from April’s report

That implies rising layoffs that are more permanent, and more damaging long-term; these aren’t jobs that are temporarily off the table because of COVID-19 business closures, but are being eliminated entirely. 2.3 million workers were reported as unemployed due to permanent job loss in the month of May, an 80% increase versus February. 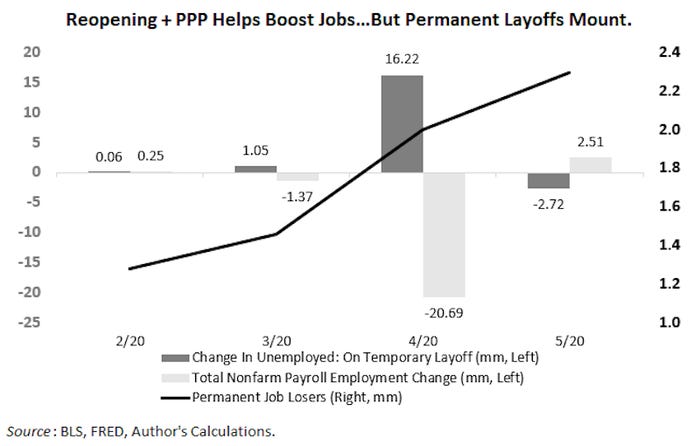 There are two key factors driving re-hirings of temporarily laid-off workers: reopening of economies across the country and cash from Congress’ small business lending program — the Paycheck Protection Program (PPP). For now, it’s impossible to say how much each impacted hiring, but the timing of the two slugs of PPP lending passed by Congress since March and reopenings around the country make some combination of the two inevitable.

Increasing employment is good news, even if it’s incomplete. But the total number of Americans employed is down 12.8% from its February peak, the headline unemployment rate is still in the double-digits (and likely understated), and sundry other indicators of labor market weakness abound.

A good example is the prime-age employment-to-population ratio. This measures the number of employed workers as a percentage of total population between 25 and 54 years old.

That metric reached the highest level since June of 2001 in February, with 80.6% of prime age workers employed. In April, it plunged to 69.7%, the lowest since 1975, and it sits at 71.4% in May, lower than any period other than April since the Jimmy Carter administration. 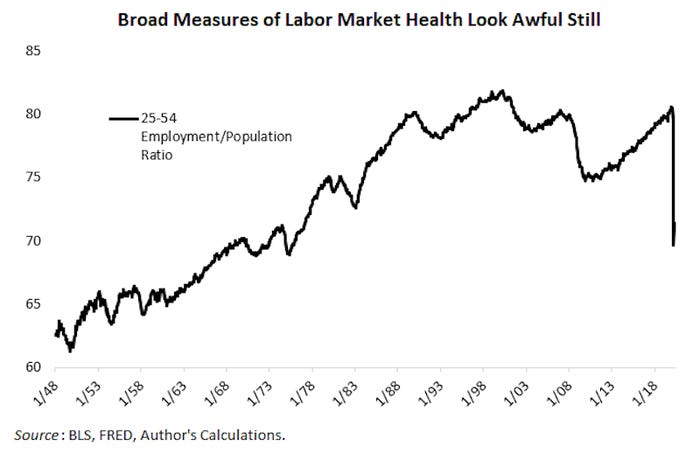 Further, more than 10 million Americans report they are working part-time for economic reasons, a record number. This category of workers wants full-time work but for a range of reasons beyond their control can’t find it right now.

How high and how far?

After the past two recessions — the dotcom bubble crash and the financial crisis — the prime age employment ratio was never able to return to its peak set in the 1990s. After the most recent recession, it took nearly a decade to get back to the mid-2000s peak.

The grinding recoveries after the past two recessions underscore the need for a strong fiscal and monetary policy response to help boost the fortunes of American households. But with the economy recovering, fiscal policymakers in Congress and monetary policymakers at the Federal Reserve will be tempted to declare job done. That would be a massive mistake.

Among other reasons, a large factor in the long, slow recovery following 2008 was the close to a decade of debt concern and deficit cuts that dragged out the recovery. Lawmakers can’t make the same misstep again.

Returning labor markets to robust and full employment must be pursued aggressively, and it’s disheartening to hear White House economic advisors make the case against supporting workers and bipartisan groups in Congress prepare to tighten fiscal policy. It’s not enough to declare mission accomplished after one jobs report that showed less than 13% of the jobs lost in March and April have come back.