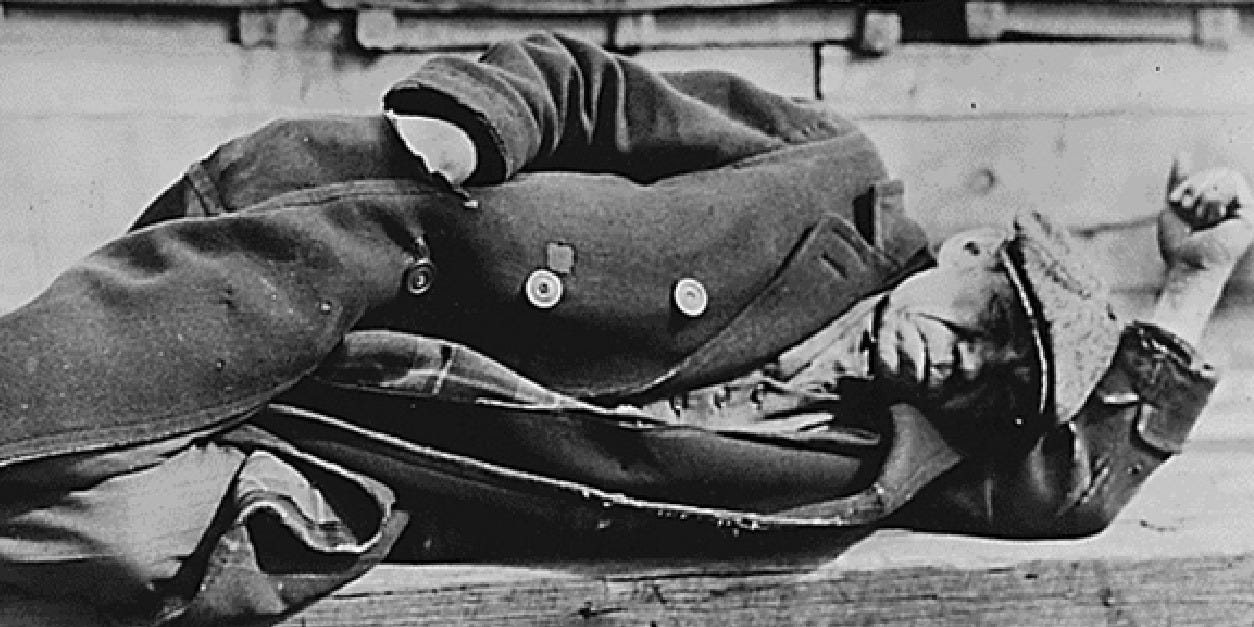 An unemployed man in a coat is seen lying down on a pier in the New York City docks during the Great Depression, 1935.

During the Great Depression of the 1930s, IBM’s CEO, Thomas Watson, proved a point that today’s executives should consider. In the worst of times, bravely bucking pressure to lay off workers and instead investing in the business can tee up explosive growth later.

Reports about layoff strategies amid the COVID-19 crisis range wildly. PwC released a survey in April saying that 32% of companies expect to lay off workers in the next month. The White House said unemployment could hit 20% by June. And more than 20 million Americans lost their jobs during the month of April, according to Friday’s jobs report.

Yet some big tech companies – Cisco, Nvidia, ServiceNow – have pledged to avoid layoffs. Some are even giving raises. It would be easy for investors to think those CEOs are delusional.

But IBM’s story from the 1930s suggests they may not be. Watson’s bet nearly destroyed IBM, yet ultimately launched it into nearly 50 years of domination of its category.

Dealing with a crash

The US economy in the first years of the Depression was in terrible shape. GDP contracted by 8% in 1930 and another 7% in 1931. More than 3,000 banks failed. Unemployment pushed toward 20% and soup lines stretched around blocks.

IBM was not huge or well-known at the time, though it had created the then-new category of “data processing.” It made time clocks and tabulating machines – electro-mechanical punch card predecessors to computers – that helped big companies manage information. The market for such products had plunged by half in the Depression. Wages dipped so low, hiring an ocean of clerks to handle data was no more expensive than getting a machine to do it.

I know Watson’s story well: 20 years ago, I wrote his biography after sifting through hundreds of boxes of his personal papers and transcripts of meetings. Watson knew the facts about the broken economy. But the grim outlook didn’t fit his plan. His words intentionally reflected optimism. “I see no signs of a severe recession,” Watson told a journalist for the April 1, 1930, issue of Forbes. “As a matter of fact, I think 1930 will end up as a very good year.”

Watson’s actions backed up his words. He made two pledges: he would keep the factories running and lay off no one; and he would increase spending on research and development.

First, the factories. Watson reasoned that the need for IBM machines was so great, if businesses put off buying them now, certainly they’d buy a lot of them when the economy picked up. He wanted IBM to be ready to take advantage of that demand. So he kept the factories building machines and parts, stockpiling the products in warehouses. From 1929 to 1932, IBM actually increased production capacity by one-third.

As the Depression wore on, Watson’s greatest risk was running out of time. If IBM’s revenue continued to falter past 1933, the burden of running the factories and holding inventory would threaten financial stability. In one meeting, Watson said to his executives about continuing to make machine parts:

“Conditions in this country are going to be better, our sales force is going to get stronger, and later on we are going to be able to do more business. I will take my chances on selling enough machines later to absorb those parts.”

And then, on January 12, 1932, Watson announced that IBM would spend $1 million – nearly 6% of IBM’s total annual revenue – to build a world-class corporate research center in Endicott, N.Y. He set his engineers loose and throughout the 1930s IBM cranked out new products and innovations, finally getting its technology well ahead of competitor Remington Rand and any other potential challengers in the category.

Soon, though, Watson’s gamble on manufacturing and research looked disastrous. The company was running out of cash. In 1932, IBM’s stock fell to 1921 levels. The board of directors discussed ousting Watson, but put it off. As the late management guru Peter Drucker told me in 2000, Watson “didn’t know how close he’d come to collapse.”

No one foresaw the coming impact of Franklin D. Roosevelt’s New Deal economic stimulus plan. FDR was elected president in 1932. As part of the New Deal, on August 14, 1935, Roosevelt signed the Social Security Act.

No single flourish of a pen had ever created such a gigantic information processing problem. The act meant that every business had to track every employee’s hours, wages, and the amount that must be paid to Social Security. Then the government had to process all those millions of reports, track the money, and send checks to those who should get them.

Overnight, demand for tabulating machines soared. An officer of the store chain Woolworth’s told IBM that keeping records for Social Security was going to cost the company $250,000 a year (the equivalent of about $5 million today). Businesses that didn’t have machines wanted them. The government needed them by the boatload.

Only one company could meet the demand. IBM had warehouses full of machines and parts and accessories, and it could immediately make more because its factories were up and running. Because IBM had been funding research and introducing new products, it had better, faster, more reliable machines than any other company. IBM won the contract to do all of the New Deal’s accounting.

This combination of events became IBM’s slingshot. Revenue jumped from $19 million in 1934 to $31 million in 1937. It would climb unabated for the next 45 years as IBM dominated the data processing industry.

Drucker said he’d asked Watson (the two knew each other) if he had anticipated the Social Security Act. Of course, the act was debated and written about well before it passed. But Watson said he had no idea it would impose such a record-keeping burden on business and the government. No one did – otherwise Congress may never have passed the act.

Watson’s recipe for success: one part daring; one part luck; and one part hard work to be ready when the luck kicked in.

So what does that say to Uber, which just laid off 14% of its employees, or Airbnb, which cut 25%, or any company looking to save money by slashing R&D?

The COVID crisis is accelerating change in business and society. Healthcare, travel, education, retail, food, and other huge sectors are getting reinvented. While the economic downturn is tragic for millions of workers and small businesses, great change also opens up great new opportunities.

Watson showed that when business leaders have the guts to prepare to jump on those opportunities while competitors hunker down and hope for the best, a touch of luck could tee up a long winning streak.